A few months ago... OK maybe about a year ago I started looking back at a hobby I had as a kid growing up - Electronics. Thanks to Dick Smith and his "Fun Way to Electronics" books I spent many available hours working on small electronic projects.... some of which included small stereo amps and even a beer powered radio!!! Fast forward a couple of decades and I have had the urge to try my hand at electronics once again. This time however, I am wanting to be a bit more ambitious and build projects which I will use for my sound design work/ music experimentations. My initial goal was to build a x0xb0x TB-303 clone synth. With a waiting list of a couple of years to buy this in kit form, I decided to source the parts myself in order to start the build whilst I still have the bug. After my initial purchase of parts which I could source within Australia I soon realised that I needed to source some rare (and expensive) parts from OS. In hindsight I should have bit the bullet and forked out the cash late last year when I first decided to go down this route... as now the Aussie dollar is so bad, that my project has already gone up 35% in costs!!! With this in mind I have decided to "slowly" acquire these rare parts should I find them at a bargain price on Ebay or the like.
With no set date to start the x0xb0x I decided to continue my quest into electronics by starting some circuit bending projects. After a scrounge around the local tip's 2nd hand section I found myself spending a total of $5 on a drum machine, a "Tickle me Elmo" and 2 x kids keyboards - enough to start tinkering with. Firstly I started on one of the keyboards. Although successful, I wasn't completely satisfied. What I wanted was a Texas Instruments "Speak and Spell". After several months of placing free classifieds I finally sourced a Speak and Read a couple of weeks ago! Although not being the Speak and Spell, it is just as good. So after a couple of weeks of wiring and testing, here are some photos of my new toy - albeit with some brain surgery! Sound files to follow soon... 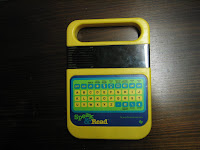 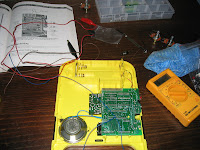 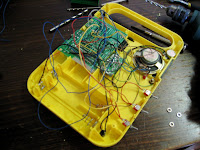 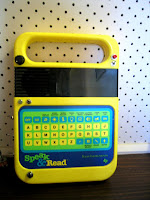 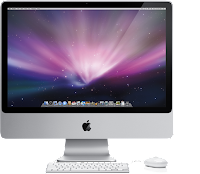 The Mac Mini claims to be the most green desktop computer with speeds of 2.0GHz or 2.26GHz Intel Core 2 Duo processors. Further details can be found here. 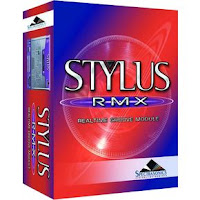 Spectrasonics has just released an update to the loop based virtual instrument Stylus RMX. Being a user of this plug, I find it compltetely brilliant and am excited to know that it now does "realtime" time signature changes on the fly, something Spectrasonics claims to be a world first!!! After watching the video, I am sure you will agree that this is a very cool new feature for those who work with loops.
Posted by Damian at 12:40 PM No comments:


Henny makes beat on iPhone 3G using Beatmaker!!! from THA BIZNESS on Vimeo.
Posted by Damian at 11:38 AM No comments:

Digidesign has release PT 8cs2 for all platforms. Click here for downloads.
Posted by Damian at 11:35 AM No comments: 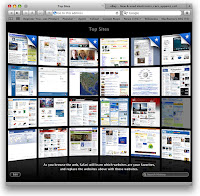 Apple has released the Safari Version 4 in public beta form. This is a public beta, which allows anybody to download and test the software ahead of an official release.

Some of the new features include:
Cover Flow - Cover Flow presents full-page previews of sites in your site history and bookmarks. Flip through them as you do albums in iTunes to find the site you’re looking for.

Top Sites - Top Sites lets you see all your favorite websites at a glance. One click opens a favorite site. And you can drag site thumbnails to customize your Top Sites page.

History View - Take a closer look at your browsing history in the History view. Search for previously visited sites, drag web pages to your bookmarks, and clear individual items. Safari displays your history using Cover Flow, so you can flip through your search results as easily as you flip through iTunes album art.

With over 150 new features, the list is far too extensive to list here. Click here to visit the official Safari features web page.
Posted by Damian at 10:16 AM No comments: