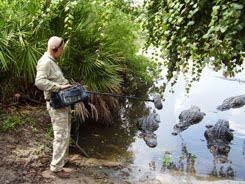 From 11-19th October The Wired Lab <http://wiredlab.ning.com/> will be hosting UK artist Chris Watson as artist in residence. Watson is a founding member of the influential experimental music group 'Cabaret Voltaire', and since the 1980's has worked as a sound recordist specialising in nature and the natural world around us. He records wildlife, the sounds of animals and habitats from around the globe.

Watson has recorded and produced the sound for a number of acclaimed documentary series such as David Attenborough's "The Life of Birds and The Life of Mammals" films, "The Big Cat Diary" and Bill Oddie's "Wildside" bird watching series. He is a renown BBC sound recordist and artist working all over the world. He has worked extensively throughout Central & South America which habitates over half of the planets wildlife.
On Saturday 17th October Watson will give a performance at the Cootamundra Creative Arts and Cultural Centre (CCACC). This will be your opportunity to hear Watson provide two live surround sound mixes from his 'Midnight at the Oasis', a 20 minute time compression from sunset to sunrise in South Africa's Kalahari desert. Along with; 'Oceanus pacificus' recorded on location around the Galapagos Islands 1000Km off the coast of Ecuador, and 10m below the sea surface.

The performance is open to all ages. Come along and be sonically transported to two of the worlds most extreme and complex environments.

WHAT: Chris Watson & The Wired Lab concert
WHERE: Cootamundra Creative Arts and Cultural Centre <http://www.ccacc.org.au/>
16-20 Wallendoon Street, Cootamundra
TIME: 6.30pm for a 7.00pm start
COST: $5-10 door fee, with proceeds to the CCACC, a volunteer run facility.
Posted by Damian at 12:31 PM No comments:

Keep your Apple 3rd Party Apps up to date 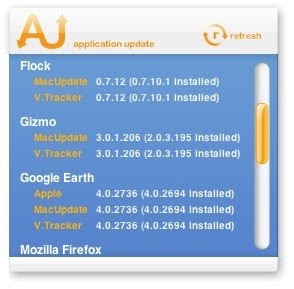 Here is a Mac widget which will allow you to keep your 3rd party apps up to date. It supports Apple’s software directory, MacUpdate and Version Tracker. It will present you with a tidy link list of all the updates found, enabling you to read release-notes and download the the updates quickly and painlessly.

Amongst the key features are automatic update checks once per day or week, Growl notifications, powerful configuration possibilities, support for Apple’s download pages, MacUpdate and VersionTracker and an extensive documentation built right into the widget (but you can also read the documentation in your browser).
Posted by Damian at 10:09 AM No comments:

Limited time! Line 6 is giving away POD Farm™, the premium tone plug-in – a $99 value! Get the tones you need for pro-sounding recordings. For FREE!
Posted by Damian at 10:34 AM No comments:

What is Qwikn?
Qwikn - an app that lets you effortlessly search and store keyboard shortcuts.
Posted by Damian at 6:36 PM No comments: