The iPad has landed... 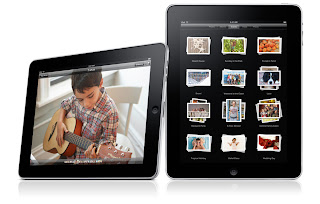 Finally after much speculation Apple has released it's much anticipated tablet- the iPad.
Apart from looking like a giant iPod Touch/ iPhone - already I can see where this device will find it's market. To be honest, I was dubious at first about the similarities to the iPod touch, however after some more thinking I can see where this device will be an awesome addition to a musicians arsenal.

Apart from being able to what you would expect: email, web, itunes, iphoto etc.... I think the iPad will be able to be unleashed as a multi faceted virtual instrument/ interface. Depending on what apps are created, I predict that the iPad will be able to be used for virtual keyboards/ synths, virtual drum kits, virtual tactile response interface and even a virtual mixer (maybe in conjunction with being connected to a PowerMac/ Macbook etc)... it will also be intersting to see if some of the big music software companies embrace this product as a control surface for their proprietry software.
Posted by Damian at 7:12 AM No comments: