Be very careful if updating to the new Mac OS X 10.5.7 update.... as the following bugs are just some of the problems starting to emerge.

There are a couple of workarounds though.. .and this may even save you a few $$$. The option I use is to download  the Squared 5 MPEG Streamer converter

This is a standalone application which will playback the audio! It also allows you to edit, (unlike QTime Pro with Vob files) and export to many other common file types. Not only that- but it can also playback full screen! So if you haven't purchased QT Pro, you can play back any format QuickTime can handle using this application, and the best news is... it is FREE!!! The only catch is that this application will need the you to have purchased the Apple Mpeg2 component plug-in. Talk about false advertising... you need to buy the Apple plug in in order to play VOB files, however the plug in won't playback audio so you need to download a free 3rd part application which actually works and does what the original plug in should do anyway... weird....
Since I am on the topic of Quicktime plug ins and codecs, I have mentioned this before but if you haven't already done so download Perian - The Swiss Army Knife of Quicktime Codecs.
Posted by Damian at 11:24 AM 1 comment: 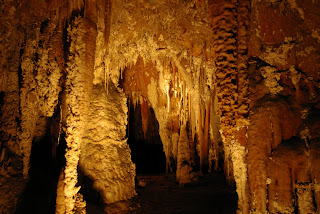 After being bitten by the "convolution" recording bug, I wanted to set a new challenge. My mission was to record the convolution of a cave! After all this sounds like fun.., doesn't it? Well yes in theory... One of the most difficult parts of convolution recording is the powering of the speaker(s) for playback of the frequency sweep. In the case of this cave another challenge loomed as there was also quite a walk into the caves. Being by myself this meant the carrying of quite a lot of gear- and at times in confined squishy spaces. Admittedly I was primarily there to record cave atmospheres, however since I made this an entire day trip I decided to take the extra gear and capture some convolutions whilst had the permission, time and opportunity.
My convolution recording set up included a pre made ProTools session (sine wave sweeps and record tracks labelled and spaced) running off a MacBook with an MBox mini. This allowed me to be able to have playback as well as a recording device all in one- with headphone monitoring. I then placed a powered speaker inside a large chamber in the cave. Because I had ProTools set up before hand, I set up my session to playback along the timeline with the sweep every 30 seconds. This allowed me with my handheld stereo field mics (plugged into the MBox) to walk around the cave and record many perspectives without having to stop and start. The cave was cold and very damp so I didn't want to take any longer than necessary. 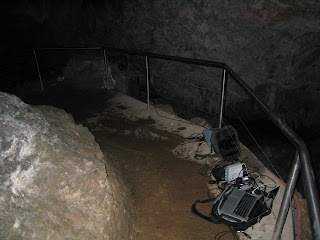 The picture above shows my basic laptop set up with the speaker set up behind in the top left hand corner. The mics as mentioned were hand held as I walked around the space. I had a Rode NT4 mounted into a Rycote blimp.
Posted by Damian at 11:58 AM 3 comments:

SMULE and the Leaf Trombone 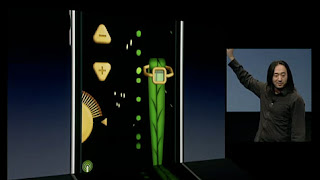 If you haven't yet seen the preview for the upcoming Apple iPhone 3.0 software, then you may be unaware of a very cool application for the iphone/ipod. Smule proudly introduces Leaf Trombone World Stage, the world's first Massively-Multiplayer Musical Game. BLOW into your iPhone and slide your finger to create beautiful melodies. Or use TOUCH mode on your iPod Touch to play without wind. It's easy to compose and share your musical inspirations with the world using Smule's new online Leaf Trombone Composer. Not only will you be a composer, but you can also judge other users works with the use of emoticons.

See it in action!
Posted by Damian at 1:42 PM No comments: